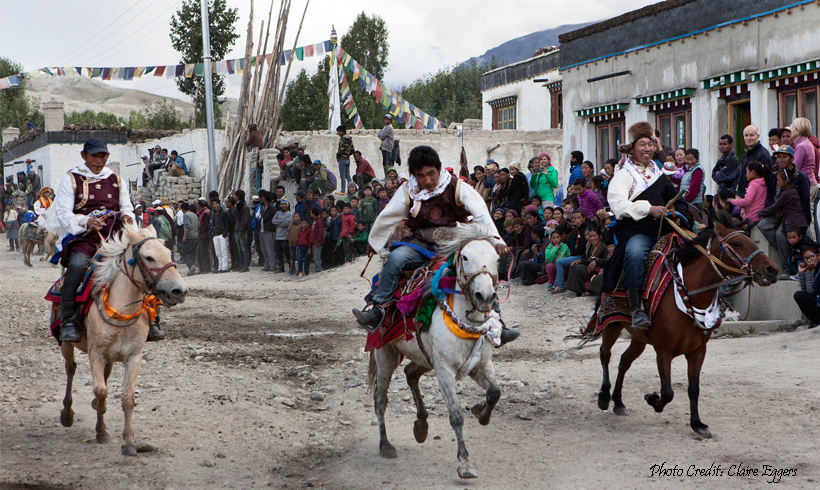 Yar tun translates from Tibetan as “summer’s end” and marks the end of the lazy days of the growing season and the start of the hard work of the harvest. The celebrations begin with a short ceremony inside the walled city, and then, depending on the day, a procession of men, women, or monks go through the town’s gate to their horses (only the King, Queen and Khenpo are allowed to ride within the walls). Then they ride to a field to the east and spend the day eating, drinking and entertaining each other with traditional Loba and Tibetan songs and dances.

In the late afternoon they ride to a track at the edge of the village, where the townsfolk watch the riders race, throw rocks at stationary targets, and pick up khatas from the ground—all while sprinting horseback. As the sun sets, festivities continue inside the city.

In the Himalayas, hidden behind the Dhaulagiri and Annapurna mountains 3,540 meters above sea level, sits the almost surreal yet breathtakingly beautiful region of Upper Mustang, Nepal. This is where the century old horse racing festival known as Yartung is held each year in the village of Lo Manthang, the 500-year-old capital. The Yartung Festival is 3 days of festivities celebrating the end of a healthy crop season and a very welcome break away from the difficult labor in the fields with an all out horse race between villagers showcasing both strength and skill.